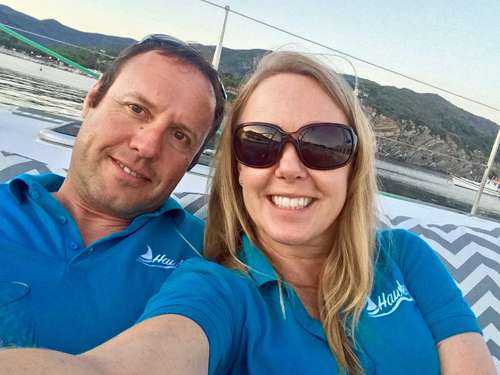 Richard grew up in a very nautical family on the shores of Cornwall. He could row almost as soon as he could walk. His father, a navigating officer in the Merchant Navy during WWII, had him mastering a sextant before he welded a pen. Richard recalls, "We spent most of our time afloat in all types of craft from canoes to sailing boats to a small motor yacht and a speedboat, all of them invariably old, unreliable and leaky, but that didn't seem to matter". Although his father has passed, he still treasures that sextant, and still uses it when crossing oceans.

Richard is a highly accomplished captain with an impressive range of certifications. He has held a commercially endorsed MCA Yachtmaster for more than 20 years, suitably certified to command commercial yachts with fare-paying passengers anywhere in the world. For nearly two decades he has been a Race Officer, rising to National Race Officer, with seven years as a Principle Race Officer for Falmouth Race Week. He has completed just about every sailing-related course possible, from first aid to fire-fighting and, of course, advanced navigation with a sextant.

Richard has worked as both superyacht captain and engineer for charter, private, delivery and refit work, in the Mediterranean, Atlantic and Indian Oceans. He knows intimately the captivating ports of the French and Italian Riviera, Croatia and Greece. Favorite cruising areas include the Balearic Islands, Sicily, Corsica and Sardinia. Sailing catamaran Hawkeye, based in San Remo, is perfectly positioned to cruise in any of these enchanting waters. And repeat guests agree, there is no more capable, energetic and fun loving captain to command her than Richard.

Alexandra grew up in Washington D.C. but summered with her family on Cape Cod every year. They had multiple small sailboats at their summer house, so sailing was second nature to her. "My mother and sister were much happier on land" recalls Alexandra. "Often it was just my father and me, careening around Stage Harbor whenever a good blow came up. I would also crew for my father in dinghy races in the bay just in front of our house. I can still hear him screaming we're luffing, we're luffing! Trim the sheet!!" Which she did at an early age with precocious aptitude. In addition to boating, she swam competitively from the age of eight right through to her university swim team, winning the championship three out of her four years.

Charter guests love Alexandra for her charm, intellect, energy and wit. She has a BA in French and International Relations and an MBA. She was a management consultant in the UK, a prestigious position that took her all over the world. In 2009 she made her first extreme change with certification and success in a career in interior design. "Then I met a Cornishman who can sail blind and I never really looked back", she explains. Looking exclusively toward new horizons, Alexandra became a commercially qualified mariner and married the man of her dreams. She says, "Now we do what we love with the person we love every day of our lives. We are living the dream".

Alexandra has developed a very discerning eye, especially for attention to detail and making guests comfortable. She is also 'quite sporty', and enjoys swimming, yoga, Pilates or plain calisthenics. When guests feel the urge to get moving she will happily organize a cardio workout that is suitable for all ages. On board Hawkeye, her goal is for everyone to have a fabulous experience, to get guests involved in the yachting life, from planning the day's itinerary in the morning to organizing charades in the evening. It's a fact, with Alexandra as First Mate, guests are in for a fun filled, rewarding vacation.