Drift from Gilded Mansions to Seaside Shacks and Sand Dunes to Tidal Flats.. a Delight in Every Harbor

The best way to sample it all is aboard the deck of your own private chartered yacht. Spend the morning exploring a pretty town center and by late afternoon, you're anchored off a deserted beach, perhaps “gunk holing” through salt marshes in a kayak, exploring a tidal pool, or fishing for the catch of the day. We can't think of a better destination for families.

There's absolutely nothing little about America's smallest state when it comes to being the spiritual home of sailing. With a history inexorably tied to the sea, boating is a way of life in Newport, Rhode Island. Since its founding in 1639, this coastal jewel has attracted a succession of ocean-going traders, well-to-do sea captains, Gilded Age barons, naval officers and America's Cup yachtsmen spanning all six centuries of its story.

Today, Newport Harbor and Bannister's Wharf remain the hub of the City by the Sea, where a Newport Yacht Charters delivers you to the heart of the vibrant sailing center. Walk along cobblestone streets, peek into Trinity Church and browse local artisan boutiques. Take a break at an English-style pub, a sidewalk café or seafood restaurant where Narragansett Bay lobster and crab are fresh off fishing boats.

Visit the quintessentially Newport yacht charters highlights. The Breakers is one of the Preservation Society's collection of magnificent mansions backing onto the spectacular Cliff Walk, offering breathtaking ocean vistas of crashing Atlantic waves. On historic Bellevue Avenue, the International Tennis Hall of Fame doubles as the world's largest tennis museum and a venue where celebrity tournaments are played on the grass court. Beaches? Newport's best are handy to town.

Without a doubt, Herman Melville, author of "Moby-Dick," couldn't have imagined Nantucket as a thriving summer colony. Nonetheless, he would recognize the former whaling community's beacon from the historic Brant Point Lighthouse, 800 pre-Civil War houses and the old cobblestones of Main Street.

Measuring only 15 by 3 miles, the National Park Service cites Nantucket Island as the "finest surviving architectural and environmental example of a late 18th- and early 19th-century New England seaport town."

However impressive, numbers don't begin to tell the story of Nantucket's romantic allure, due in part to its location. Thirty miles into the Atlantic from Cape Cod's coast, the island's Algonquin name means "faraway land," providing a sense of remoteness that Martha's Vineyard has never shared. Explore pristine beaches bordered by rosehip-covered dunes on your Nantucket yacht charter. Snap postcard-worthy lighthouses, Quaker burial grounds and cranberry bogs. Venture along miles of biking and hiking trails lined by a riot of wildflowers. Pop into art galleries that line the dock at Straight Wharf, right near the Whaling Museum and everybody's favorite ice cream shop.

Come the close of day, catch a famously fiery sunset at Madaket Beach and contemplate the planets through telescopes at Maria Mitchell Observatory You’ll discover why Nantucket yacht charters excursion is often the highlight of a New England vacation. 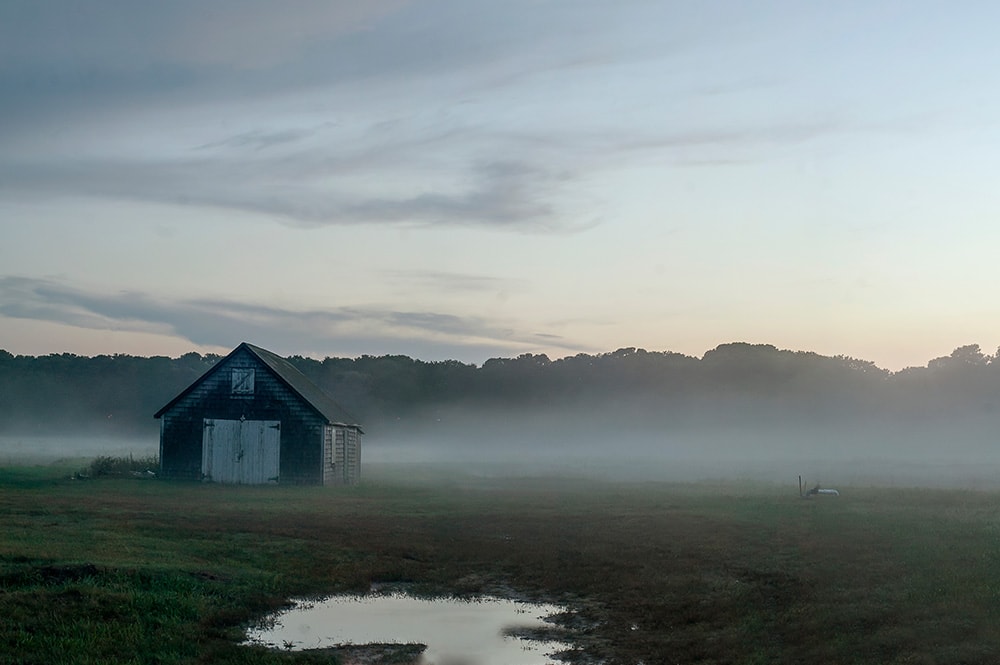 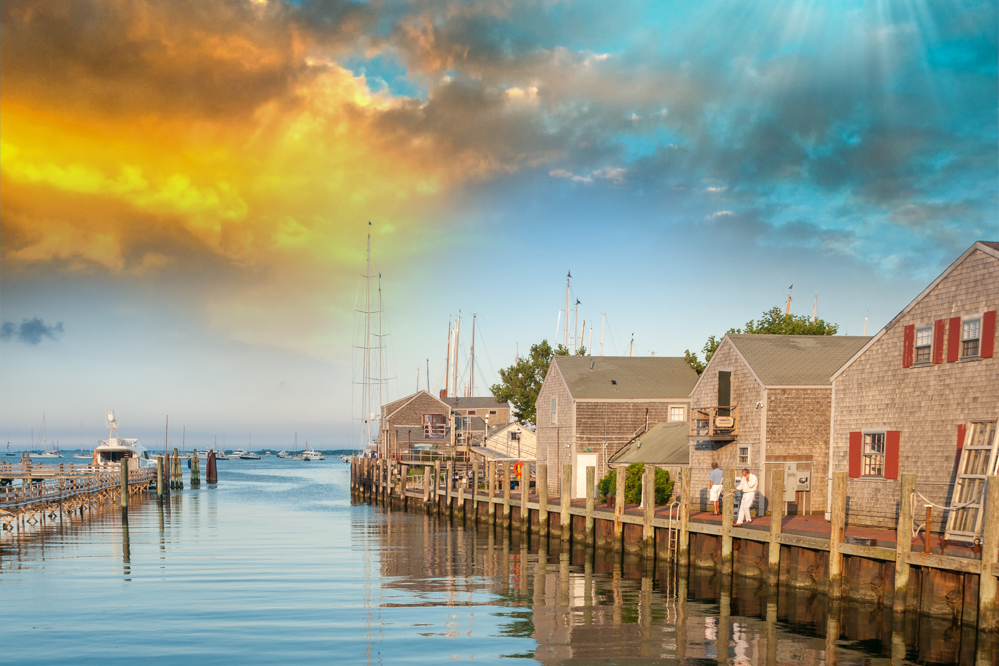 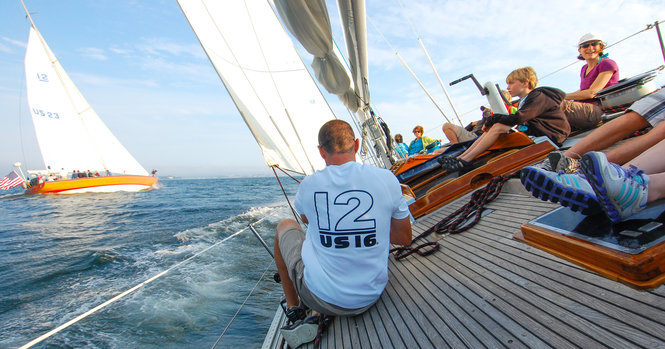 The lure of this enchanting island five miles off Cape Cod reaches to the Hollywood Hills and onto the pages of the White House vacation diary. With its six distinctly different towns, three major ports, and plenty of beautiful broad beaches, we recommend a stay of at least two days here on your Cape Cod yacht charter.

Aquinnah is known for the magnificent display of multi-colored clay cliffs spilling down to the sea on the border of town. Oak Bluffs has Carpenter Gothic gingerbread-style cottages and the nation's oldest spinning antique, the painted Flying Horse Carousel. Edgartown Lighthouse offers incredible views from the top of its spiral staircase. Accessible by a 5-minute ferry ride, Chappaquiddick is home to a shorebird wildlife sanctuary and a 14-acre Japanese garden. The historical society provides guided tours, pointing out three centuries of design in local residences: early saltbox, Greek, Revival, Georgian, cottage and modern. As change comes slowly to Martha's Vineyard, you may recognize locations from the 1975 movie “Jaws," filmed on this picturesque island. 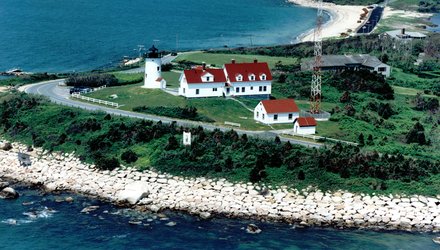 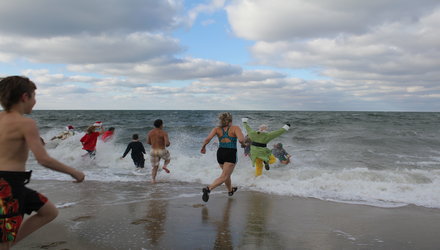 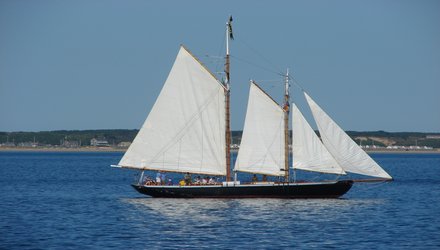 A small seaside resort off the Rhode Island coast, Block Island does just fine without the caché of being a celebrity magnet. We love the description of Block Island as being a bit like Ireland minus the sheep. With its rolling green hills and dramatic bluffs, the island also has long stretches of lovely beaches and a pond for every day of the year -- 365 in all.

For a closer look at the harbors and highlights of a Newport Yacht Charter and Cape Cod Yacht Charter, see a Sample Itinerary.

Oozing with historic charm as well as endless beaches and shoreside activities, this is a superb summer destination for families. The Newport Jazz festival is a summer highlight, and yachts can anchor right off of the festivities. The pristine islands of Martha’s Vineyard and Nantucket are not to be missed.