Sicily is the largest island in the Mediterranean and lies off the toe of Italy’s boot. Sicily oozes with a vibrant history of Greek, Phoenician, Roman, Arab and Norman roots. It shimmers with art, archeology, architecture, and folklore. Palermo, its largest city, is a must with its bustling medieval streets and marketplaces. Catania sits under the shadow of Mt. Etna, a volcano that determined its history. After being devastated many times, the old city was built in baroque style out of the black volcanic rock that Etna spewed on the city.

Sicily is also the perfect place to cast off for an Aeolian Islands sailing trip The Aeolians are a volcanic archipelago of eight islands off the northeast of Sicily and a UNESCO World Heritage site. You won’t find much in the way of glitzy nightlife – mostly quaint villages, rugged mountains, active volcanoes, lively ports, and cobalt blue waters. 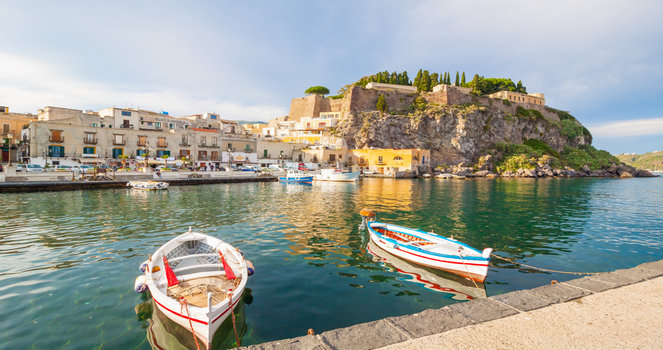 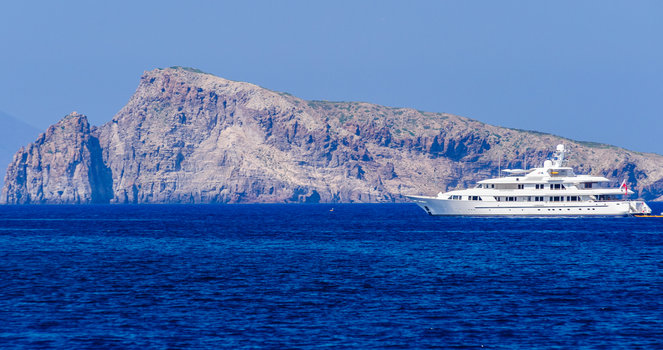 Fly into either Palermo or Catania and transfer to Milazzo where your yacht charter in Sicily, Italy will begin. Milazzo dates back to 716 BC. Be sure to visit the splendid medieval castle built during the Norman era. Located on the edge of town, the castle is one of Norman Sicily's best kept secrets and well worth a visit if you're a lover of medieval military architecture.

Mythlogy describes this island as the workplace of Hephaestus – the god of fire and blacksmiths. Famous for its volcanic fumaroles both on land and under the sea. Fumes hiss out of the pavement ,and swimming here is qute an experience with hot gas bubbling up underneath you – a jacuzzi in the Mediterranean Sea. The appeal of the island is its stark beauty, the mud baths, the hike to the crater.. you’ll find only a few hotels and bars. And full disclosure – the island does have a sulpher scent so most yacht charters in Sicily, Italy move on to another anchorage for the evening.

Lipari is the largest island and offers the widest selection of restaurants, shops, and things to do. Be sure to visit Museo Eoliano – the archeological museum located within the wall of the old city. Or take a hike to the top of Mount Sant'Angelo for a view that will leave you breathless. From the town of Lipari, you can rent scooters to tour the island and the more remote villages. Once the center of pumice production, the sea bed is now covered in white pumice dust which makes the water rival the Bahamas. And you’re likely to have fresh caught fish for dinner aboard your yacht charter in Aeolian Islands.

Stromboli, the northernmost island of the archipelago is the crown jewel of the Aeolians – the highlight is its continuously spewing volcano. Hearty and fit folks will enjoy the hike to the top – 3 hours up and 2 hours down… but well worth the effort and of course, dependent upon how active the volcano is. An absoulte must is basking on the deck of your yacht charter in the Aeolian Islands and watching the volcano erupt at night. Stromboli also has a couple of small offshore islands that are worth a stop for a swim or watersports. 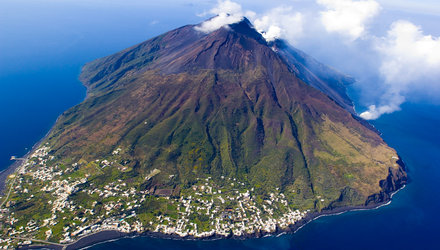 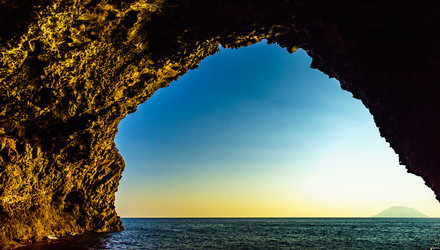 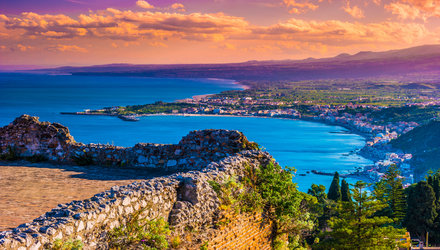 The smallest and jet set island – a party destination in season and a sleepy, car-free island off-season. The legendary Hotel Raya with its many shops, restaurants, and nightclubs lines the shores of the harbor of San Pietro. Panarea is quite picturesque with its white buildings coiffed with giant yellow flowering bushes. You’ll discover several lovely little coves for watersports during your vacation aboard a yacht charter in Aeolian Islands.

The second-largest, greenest, and tallest of the islands with numerous hiking trails. The main port of Santa Marina Salina is stunning and unspoilt – no cars on the main street – lots of chic boutiques and restaurants. Famous for its capers and sweet Malvasia wine. Salina has a handful of small villages including Pollara where Il Postino was filmed and a favored spot for sunsets.

the most westerly and of-the-beaten track islands. Alicudi is wild and remote with only one restaurant. Being car-less, mules do the work of vehicles. Filicudi has a few small villages and restaurants, rocky beaches, and sparkling waters. A must do for those who want to enjoy all that a yacht charter in Aeolian Islands has to offer.. away from it all in exquisite natural beathy.

Combining the spirited cities of Sicily with the dramatic Aeolian islands offers a charming blend of history, culture and unabashed nature. The ascent to the crater’s edge of very lively Stromboli volcano is a peak experience… a must for your bucket list. Or just relax on the deck of your yacht, sipping a local Malvasian wine as Stromboli spews its molten lava into a star-flooded sky.